Heating, ventilation, and air conditioning (HVAC) systems provide air conditioning by blowing air over a cold coil that contains refrigerant. The coil temperature is often below the dewpoint of the outdoor air, which results in water condensing on the coil surface. The water drips off the coil and collects in a pan below the coil. A drainpipe connected to the pan is designed to drain the condensate water from the HVAC unit to outdoors. When the air handler is located in a sensitive location (e.g. above a ceiling) often times there is also a condensate drain overflow pan with a backup drainpipe. Condensate drainpipes can become clogged and fail, resulting in standing water inside the HVAC unit and water leaks to surrounding areas (e.g. drop ceiling, attic space), increased maintenance costs, and increased risk for mold and bacteria growth. Furthermore, when drainpipes are dry and the HVAC system is operating, the drainpipe is an open to conditioned air leakage to the outdoors, resulting in lost heating and cooling energy.

With origins dating back to the early 1900s, P-traps are often installed on air conditioner condensate drains to seal against air leaks. The intended purpose of the p-trap is to allow condensate to flow from the equipment while simultaneously preventing air leakage into or out of the unit. To prevent air leakage, the height of the water “h” (image above) in the trap must exceed the pressure created by the air handler with respect to ambient environment, otherwise the water will be displaced, and air will leak through the trap. Condensate to fill the trap is only generated when the air conditioning is operating and the evaporator coil temperature is below the return air dew point. Therefore, unless the traps are sufficiently tall to hold condensate for months at a time, the trap will likely dry out and leak air during winter and shoulder seasons, a problem that is exacerbated in dry climates. In these instances, heated and cooled air is lost to the outdoors, wasting energy.

The HVAC Air-trap from Des Champs Technologies is designed to eliminate air leakage from condensate drainpipes and reduce the space required for the trap. An example version of a trap is shown in the above image (right). While there are designs of the trap that operate in negative and positive pressure orientations, the example in the image is for an air handler that operates at negative pressure with respect to the environment. When no condensate is present, the negative air pressure pulls the lightweight ball against a seal to reduce leakage. When condensate is present, the water pressure moves the ball so that the water can drain.

WCEC researchers conducted laboratory testing of the Des Champs Technologies HVAC Air-Trap technology to measure its air leakage performance and assess its suitability as a replacement for standard p-traps.

Researchers used data from manufacturers and industry standards to determine the test conditions that best represent condensate drainpipes on a packaged rooftop unit, including pipe diameter, pipe length, and external static pressure conditions at the drainpipe. Lab testing was conducted to measure air leakage in a dry PVC pipe with variation of the following parameters:

An additional test was conducted for the 1.0 in diameter, 2 ft long pipe with a p-trap at the positive pressure conditions. 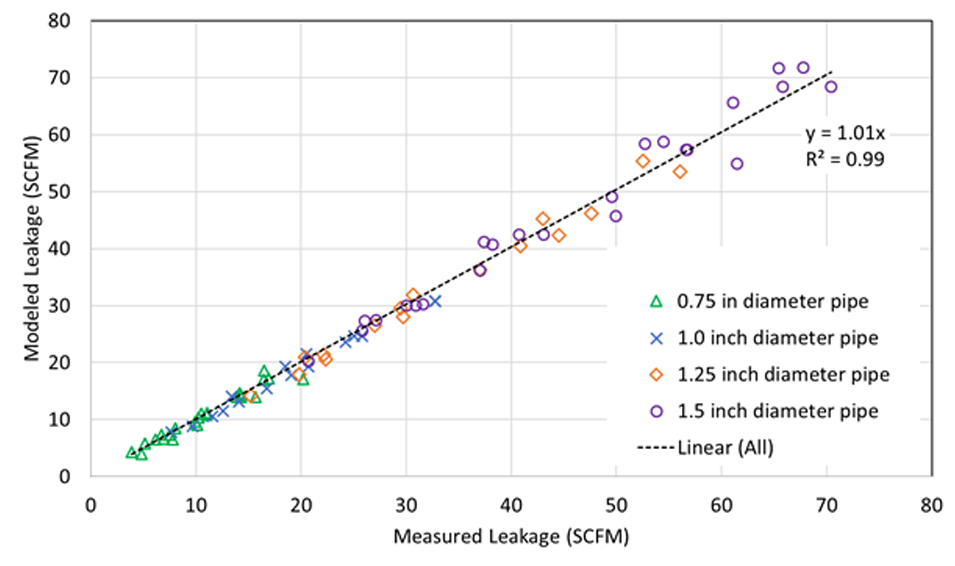 Comparison of results from the analytical model and the lab tests for leakage rates. This is for all pipe lengths and diameters for each static pressure.

Researchers conducted an energy savings analysis for California to estimate the potential energy savings from applying the HVAC trap to reduce air leakage from condensate drainpipes.

Finally, a school district was provided with approximately 40 traps for installation on one building undergoing HVAC system replacement to obtain their feedback.

All four models of the HVAC Air-Traps showed a significant decrease in leakage compared to the open pipe tests. For all models tested at all pressures and pipe diameters, measured air leakage rates were less than 1 standard cubic feet per minute (SCFM), and 90% of the tests had leakage rates less than 0.5 SCFM. The results demonstrate the HVAC Air Trap is an excellent alternative to a p-trap that will reduce air leakage in a dry condensate drain line to a negligible amount. 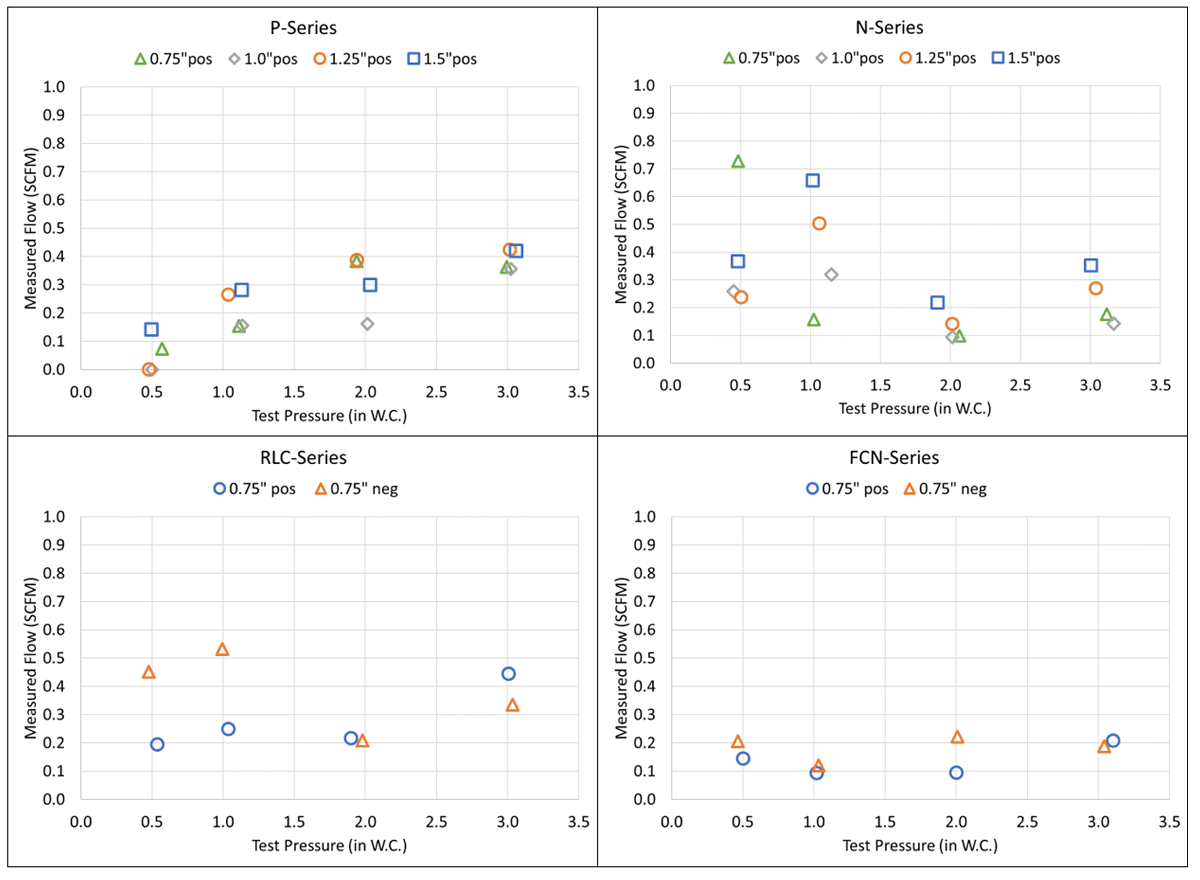 HVAC Air Trap test results demonstrating that all traps tested at all pressures and pipe diameters had a leakage rate of 1 SCFM or less.