The Electric Power Research Institute (EPRI), funded by the California Energy Commission, is integrating several advanced technologies into a single space-conditioning system for residential buildings that is cost-effectively optimized for California’s climate. As part of this project, WCEC is testing one of these advanced technologies—a variable speed heat pump system.

This project is evaluating how the performance of a typical duct system changes as variable-speed equipment modulates its speed.

We evaluated the impact that a typical residential duct system, located outside the conditioned space (e.g., in the attic), had on variable speed heat pump performance. There were three primary phases of this research:

Phase I: Laboratory testing with a single-zone configuration

Zoning was very effective at maintaining system performance under part load conditions. With a single-zone configuration, there were significant losses of cooling to the attic at lower speeds. Even though equipment performance generally improves at lower speeds, researchers found that optimal performance of the combined equipment and duct system occurred at high speeds when hot attic temperatures exceed 95°F.

Adding zoning capability significantly improved system performance at lower speeds by maintaining duct velocities. The optimal strategy for achieving this was by matching the fraction of capacity to the fraction of the duct system served. For example, if the system was running at 50% speed, cooling was delivered to only 50% of the zones. 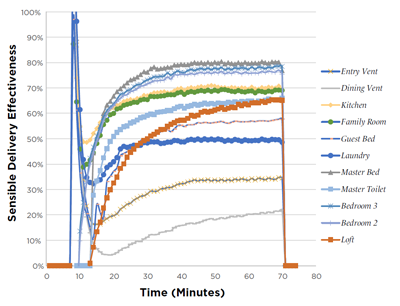 Sensible delivery effectiveness for each grill at field site during a period of full-speed operation with a single-zone configuration and R-6 duct insulation.

Researchers found that zoning can significantly improve delivery effectiveness with nearly twice the amount of cooling making it to the conditioned space compared to a non-zoned system at low speed and hot attic temperatures. In addition, researchers found that at low attic temperatures there was an advantage to using variable speed equipment and even more of an advantage when including zoning. At high attic temperatures, there was no advantage to reducing equipment speed since the optimal performance occurred at 100% speed, but there was still a slight advantage using variable speed equipment with zoning controls allowing the system to run at lower power at higher efficiency.