Refrigerants used in vapor-compression air conditioners and heat pumps are ubiquitous and have a high global warming potential (GWP).

To help reduce the effects these greenhouse gasses have on our atmosphere, companies are developing alternative refrigerants with lower GWP. This research evaluates new, lower GWP refrigerants and compares performance against the standard R-410A refrigerant.

This project, funded by Trane, compares the performance of a unitary heat pump using the industry standard R-410A and a new low GWP refrigerant R-466A.

We tested the performance of the unit at six outdoor air conditions using an environmental control chamber at the Western Cooling Efficiency Center. The unit was instrumented so its performance could be quantified according to the ANSI/AHRI Standard 210/240 and compared at each test point. 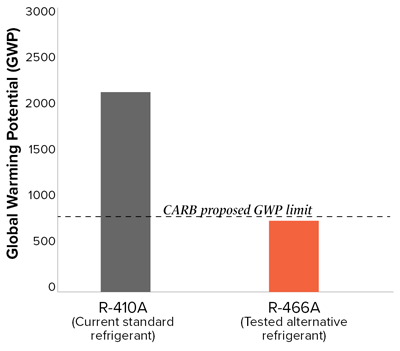 We tested a new refrigerant, R-452B under a variety of conditions and compared the results to the standard refrigerant, R-410A. This refrigerant is claimed to have a 70% smaller GWP than R-410A. R-452B is also a drop-in replacement for 410-A, requiring no more than a possible TXV replacement to account for the change in operating pressures and refrigerant mass flow rate.